2010 rang in with a lighted orb in the shape of a beach ball dropping from a fire engine’s ladder. Now that is a Carolina Beach style New Year’s Eve event! Then the fireworks began and everyone was having a great time dancing and singing to the music provided by the DJ on the stage at the Boardwalk. Everyone seemed to be in a positive mood and ready for the New Year.
Because this event is new at the Carolina Beach Boardwalk a couple of news crews came to the island to see the show. According to them there was over a 1000 people who came out to ring in the New Year.

The event this year was a huge success considering the night was supposed to be chilly and rainy. Oh there were a few drops of rain about 11:15 then it went away and the clouds parted so you could also see the Blue moon and the wind stopped. The night seemed fresh and alive with the excitement of the coming New year. 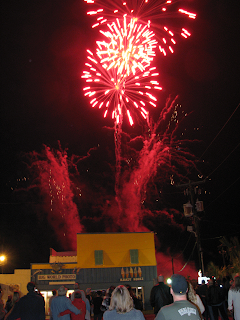