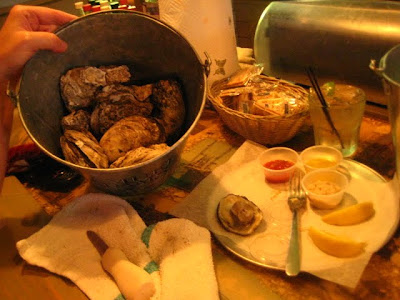 On our second night in Carolina Beach, NC, we departed the Beacon House Inn for a leisurely bike ride around town, in search of dinner. Not knowing where we were headed, it turned out that The Shuckin’ Shack Oyster Bar was calling my name…

I think it was the window display that first caught my eye. That day’s catch, neatly lined up on ice. I was already drooling on the inside, so we ventured inward.

The place was bustling, even on a Monday night. Families were dining in the sidewalk seating area, couples and grown-up families were seated around the interior. We seated ourselves at the bar. Cassie, our server, warmly greeted us, and gave us menus.

‘Who needs a menu?’, I thought to myself. I already had my heart set on the oysters. But, I wasn’t prepared for the choices: steamed or on the half-shell? But, which variety? Should they shuck or should I shuck? I eventually settled on the Monday Night Special – 50 cent (I shuck) steamed oysters. My non-seafood-loving husband opted for the chicken tenders, the coleslaw and the corn. We were impressed – they really do have something for everyone!

So, my bucket of oysters arrived, along with an array of yummy accompaniments, a towel and a shucking knife. Yay!!!

Noah started on his dinner.

Cassie, the bartenderess, quickly offered her assistance. She gave an expertly effortless demonstration. All of a sudden, I felt confidence coming on!

I turned my attention back to my dinner. And, after some trepidation, I pried an oyster open! I dipped it…first in butter, then in chili sauce. I ate it. O, Triumph of deliciousness!

At first I thought, ‘what a lot of effort, just for dinner…’ But, of course by the time I made my way through that dozen, I only wanted another (actually, I still do).

The Shuckin’ Shack Oyster Bar grew out of a vision for a local establishment that would appeal to families of all ages. In 2007, that dream came to fruition. It is now a place for friends and family, locals and tourists, to enjoy great food, good company, and a bit of island history.

We don’t think it’s any coincidence that there is only one oyster bar in Carolina Beach, NC. It really doesn’t get any better, than The Shuckin’ Shack Oyster Bar!

We will return! Probably on Monday, but maybe sooner. 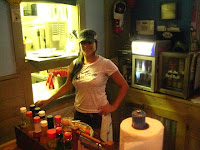 (If you find yourself intimidated, just ask our new friend Cassie for a shucking demonstration!)