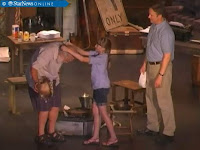 I have always been intrigued by the life of Robert E. Harrill, also known in these parts as “The Fort Fisher Hermit”.   Well, now a play based on his life story is finally coming to Wilmington! The play has been met with great success at the Paramount Theater in Burlington, North Carolina for the last two summer seasons.  Big Dawg Productions in Wilmington is bringing the show to the Cape Fear Playhouse for a four week run next summer. While there have been books, movies and blogs about his story I am excited to see this interpretation of his life on the stage. According to this article in the Star News the extensive research that was done for this performance truly brings a richness to his biography.

Rumor has it that during his time living in Fort Fisher, The Hermit became the second largest tourist attraction after the Battleship North Carolina.  He spread his wisdom and “common sense” to all who came to visit him where he lived in a World War II bunker for the last seventeen years of his life.

For any of our guests at the Beacon House Inn who enjoy a scenic walk I always recommend a hike down the Hermit’s Trail.  The trail begins at the Fort Fisher Recreation Area, winds through wooded areas and along the beach.  There is a stopping point to visit the bunker where Robert lived until he died in 1972.   The trail continues to an observatory deck overlooking the Fort Fisher Basin area, a popular place for birders to see many of our colonial nesting birds such as ibis and herons.

The story of the Hermit is both inspiring and sad. I look forward with great excitement to see his life in this new light.