Last night I received an email for this once in a lifetime event and I thought you might like to come and attend it. When I was a kid I got to see one of these shows and it was so much fun.
Wilmington’s hometown hero, Meadowlark Lemon, is returning to his home city with MEADOWLARK LEMON’S HARLEM ALL STARS for basketball games at 7:00pm on Friday, August 27th and Saturday, August 28th at the Cape Fear Community College (CFCC) Schwartz Center.

A never before seen event, MEADOWLARK LEMON’S HARLEM ALL STARSTM with all- stars Hollywood Brown and Pee Wee Harrison, will compete against two opposing teams: Friday’s game against local coaches (highschools, CFCC, UNCW and the Sea Dawgs). Saturday’s game is against crewmembers of the USS GRAVELY (Naval Destroyer set to be commissioned in Wilmington on November 20, 2010) including Commander Douglas Kunzman. 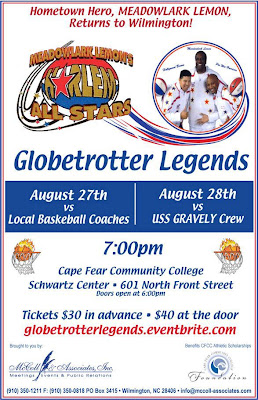 Known as the “Clown Prince of Basketball,” Meadowlark has thrilled millions of fans with his basketball skills and slapstick comedy.  A gifted athlete and hilarious comedian, he was the most popular member of the most beloved sports team in history – the Harlem Globetrotters. A native of Wilmington, North Carolina, he attended Williston Industrial High School before his recruitment to the Harlem Globetrotters.