Have you ever taken a stroll along Carolina Beach, and wondered what people are fishing for? I have, and everytime I ask a fisherman/woman, I get the same response, “Whatever is biting!” Courtesy of the Fisherman’s Post, here is a little bit about what has been biting recently – on the surf and on the pier: Bud Holt, of Carolina Beach, with a 3 lb., 3 oz. pompano that bit fresh shrimp in the Fort Fisher surf. Wes, of Island Tackle and Hardware, reports that anglers are still connecting with some sea mullet near the mouth of the Cape Fear River. Dunking bottom rigs baited with shrimp and bloodworms around deeper holes is the way to connect with the mullet. Some smaller speckled trout are also feeding in the Cape Fear River. Anglers can tempt them to bite live shrimp, Gulp baits, and a variety of other lures. The red drum bite in the bays off the lower Cape Fear has been up-and-down, but anglers are catching a few on live mud minnows and Gulp baits. Some black drum have been feeding around Carolina Beach Inlet, where they’re taking an interest in fresh shrimp on bottom rigs. The inlet area and the CB boat basin are also producing some flounder for anglers casting Gulps and live baits. Spanish mackerel are beginning to make a showing off the beach, with decent action reported around Johns Creek and the Marriott Reef lately. Trolling Clarkspoons behind planers is the best way to connect with the spaniards. A few king mackerel have made their way nearshore, but the main body of fish is still spread out from the Fairway Buoy to Frying Pan Tower. Live baits and dead cigar minnows will both tempt bites from the kings. The few boats who’ve made the run to the Gulf Stream lately are reporting excellent blackfin tuna fishing, a few wahoo, and some smaller dolphin starting to show up. Skirted ballyhoo will tempt bites from all the blue water gamefish. Jeff, of Seahawk Inshore Fishing Charters, reports that red drum are still schooling in the bays off the lower Cape Fear River, but the schools have sometimes been reluctant to bite lately. When they’re in a feeding mood, topwater plugs and soft plastic paddletails will tempt them to bite, but scented baits like Gulps and live mud minnows are more effective when the fish are finicky. Some flounder and speckled trout are feeding in the same areas as the reds, and D.O.A. and Gulp soft plastics have been getting their attention. Dave Ferguson, from Canada, with a red drum that bit a Gulp shrimp in the lower Cape Fear River while he was fishing with Capt. Jeff Wolfe of Seahawk Inshore Fishing Charters. Some chopper bluefish (to 10+ lbs.) have moved into the lower river and are striking topwater plugs with abandon. Sheepshead are beginning to show up inshore, and dangling fiddler crabs near rocks or other hard structure is the way to connect with the hard-fighting and tasty fish. 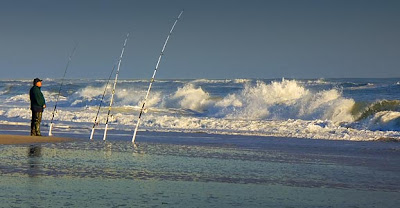 Robert, of Carolina Explorer, reports that red drum and some large chopper bluefish are feeding on the flats of the lower Cape Fear River. They’ll bite topwater plugs some days, but Gulp baits and live mud minnows are more consistent producers. A few flounder are in the same vicinity, and Gulps and mud minnows are tough for them to pass up as well. Some black drum are feeding around structure in the lower river and taking an interest in bottom rigs baited with shrimp. Out in the ocean, jigging metal lures around nearshore structure is producing fast action with gray trout, bluefish, and big black sea bass (which must be released until June 1). Johnny, of Kure Beach Pier, reports that plug casters are hooking up with good numbers of bluefish and a few spanish mackerel, primarily in the early morning hours. Live baiters fishing the end of the pier landed several king mackerel last week (the largest 16 lbs.) along with some big chopper bluefish. Some sea mullet are biting bottom rigs in the late evening hours. Shrimp have been producing the most action.