The Wilmington area local beer scene is exploding! We have 15 local breweries in the Wilmington area and one on Pleasure Island. Each brewery is a little different so we want to tell you about all of them starting with Good Hops in Carolina Beach.

https://www.goodhopsbrewing.com/
Located at 811 Harper Avenue, Good Hops is the only brewery on Pleasure Island. Good Hops has a large outdoor area, is dog and kid friendly, and just a mile and a half from the Inn. Flagship year round brews include an IPA, Pale Ale, Golden Ale and Brown Ale. Regular rotating beers include a Double IPA, Pilsner, Hazy IPA and Irish Ale. A few Seasonal Favorites coming soon include a Blood Rose Belgian, Imperial Russian Stout and the Donna Pineapple Golden Ale. Regular events involve live music, trivia, darts, disc golf, food trucks and Saturday morning ‘pay what you can’ yoga classes.

If you’re staying at our City Flat, you are just a short Uber/Lyft, walk, or bike ride away from six local breweries.

http://www.waterlinebrewing.com/
Waterline Brewery is Located at 721 Surry St. right next to the Art Factory Gallery. The brewery is located in a renovated 1940’s warehouse and located under the Cape Fear Memorial Bridge. The expansive taproom or outdoor beer garden is a perfect place to sip one of their many beers. Flagship beers include an IPA, Tripel, Oatmeal Stout, Red, Kolsch and American Pale Ale. Seasonal brews currently on tap include a Black IPA, Coffee & Cream, Porter and a Pale Ale. Check out their events page for information on live music, food trucks, art events, comedy, yoga classes and more.

https://www.newanthembeer.com/
New Anthem Beer Project is located on Dock Street, a short walk from the City Flat. Weekly events include Tuesday Night Jazz and live music every other Wednesday. This place is perfect for the IPA lover! New Anthem currently has eight different styles of IPA on tap including a wheat IPA and a New England IPA.

http://www.frontstreetbrewery.com/
Front Street Brewery is a Wilmington Downtown Staple. They are a full brewery and restaurant, serving their full food menu until 12 PM every night. Every day at 3:15 and 4:15 the Brewmaster provides a free tour and tasting of the brewery and beers. Flagship beers include a Raspberry Wheat Ale, ESB, and a Scottish Ale among many others. Some seasonal favorites include a Strawberry Rubarb Sour and a Honey Beer.

https://www.ironcladbrewery.com/
Iron Clad Brewery is located in a historic building dating back to 1925. The brick, roof and some original wood were repaired, re-purposed and remain as part of the structure. Iron Clad is not only a taproom, but a rent-able venue accommodating up to 500 people. Some of their house beers include a Golden Ale, IPA and Stout.

http://www.flytrapbrewing.com/
Fly Trap Brewing is located in the Brooklyn Arts District Downtown. They specialize in Belgian Style Ales, brewed in small batches. Fly Trap focuses on supporting and giving back to the local community. Art exhibitions of two local featured artists are displayed in the taproom, rotating every two months. Fly Trap has a variety of rotating food trucks Thursdays-Saturdays as well as art events, live music and more!

Edward Teach is located in a historic building, built in 1907, that served as the fire house until 1971. Named after the famous pirate Blackbeard, the downstairs bar is modeled after the ship ‘Queen Anne’s Revenge’ and the entire building is meant to feel at sea. They provide a variety of styles of beer including a Wit, Lager, and Chocolate Porter among many others.

Wilmington Brewing Company
https://wilmingtonbrewingcompany.com/
Located in the middle of town, Wilmington Brewing Company consists of a brewery, taproom, and homebrew supply store. WBC has 15 rotating beers on tap, all brewed in house. Relax in their taproom and sip on a Jalepeno Saison, Milkshake IPA, or Sweet Potato Amber Ale. Take home a six-pack of cans to enjoy at home!

Bill’s Front Porch is a casual pub serving creative bar food and house made beers. Their flagship beers include a Citra Hop Pale Ale, Mosaic IPA and a Breakfast Stout. They serve brunch, have trivia and live music events.

https://www.skytownbeer.com/home
Skytown Beer Co prides themselves on perfectly pairing beer & barbecue. They serve pub food, along with barbecue and house made sauces and vinegar. On tap they serve a rotation of IPAs, Red Ales, Wheat styles and porters.

Focusing on the art and science behind brewing, Broomtail uses locally and internationally sourced raw materials to provide the best quality beer for their customers. Broomtail has a quaint lounge area as well as outdoor seating. In 2016 they opened their Sour Barn on Market St. which includes a taproom and beer garden. Both locations provide live music, food trucks, outdoor games (like giant Jenga), trivia, and much more! Whether you’re looking for more traditional brews or you’re into the ancient art of sour beer, either location has something for everyone to enjoy!

If you love beer enough to trek far away from Pleasure Island or Downtown Wilmington, the Wrightsville Beach area has a few breweries worth checking out.

Wrightsville Beach Brewery
WBB prides themselves on their ability to give back to the community they love. Each month the brewery features a “Beer of the Month” and 11% of the total proceeds of sales go to a local non-profit. The non-profits change every month and information about each can be found on their website. In addition to brewing a variety of great beers, WBB serves a full menu of brunch, lunch, and dinner with emphasis on fresh local ingredients. A few examples of some of their brews are the Wilmywood Wit, Pompano Porter or the Waterway IPA.  https://www.wbbeer.com/

Mad Mole Brewery
Mad Mole is a newer addition to the Wilmington area beer scene. Located on Oleander Drive, the brewery is owned by a group of friends who had previously been home brewing for years. Some of their beers include the Tunnel Digger New England IPA, Darth Mole Stout, and Raspberry Moley Kolsh. They also serve ciders and wine if beer isn’t your thing!  http://madmolebrewing.com/

Waterman’s Brewing company is owned by Zac Brown, who focuses on traditional English brewing techniques and ingredients. The brewery has a full food menu serving brunch, lunch and dinner. The food menu is a mix of funky plays on traditional bar food, and clean eats like salads and veggie burgers. Join their Run Club on Wednesdays to join like minded individuals who appreciate a cold beer after a nice exercise. Some of their brews include the Morning Glass Coffee Ale, Sandblaster Blonde Ale and the Abundant Sunshine IPA. They also have other local beers on tap in addition to their own!  http://www.watermansbrewing.com/ 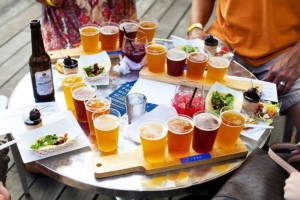